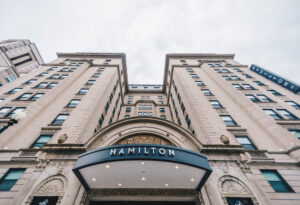 Hamilton Hotel, an iconic, 326-room hotel located in downtown Washington D.C., is celebrating a centennial of hospitality in the Nation’s Capitol this year. To honor its 100th Anniversary in 2022 and its induction into Historic Hotels of America, the hotel is offering specials and milestone incentives all year long.

Cheers to one hundred years! But portions of the building actually date back even further, to 1851, when it was constructed as a private school. A series of renovations and refurbishments ensued, eventually leading to the site of a AAA 4-diamond luxury hotel in DC.

Even in its earliest days, the Hamilton Hotel was a beacon of sophistication and statesmanship. Named, in a roundabout way, for Alexander Hamilton — though actually in honor of Mrs. Hamilton Holly, a friend of the then-owner’s wife and the daughter of the Founding Father.

Reestablished under corporate ownership and after a Beaux Arts and Art Deco redesign under a celebrated architect, the Hamilton Hotel Washington D.C. debuted to much fanfare in 1922.

This testament to the Industrial Age has played host to everyone from musicians and entertainers to labor leaders and presidents, and been witness to many key historical moments, even serving as the venue for one of President Franklin Delano Roosevelt’s inaugural balls — and also as his War Room during World War II. 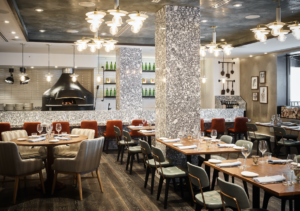 “Hamilton Hotel is honored to have reached this milestone, serving as a gathering space for the D.C. community for over 100 years,” said Mark Driscoll, Regional Managing Director at Hamilton Hotel. “In celebrating this anniversary, the hotel will honor its storied past, while paving the way for what will represent the next 100 years of hospitality and culture in D.C. We look forward to welcoming politicians, industry-leading professionals, family and friends through our doors for the next 100 years to come.”

Check for monthly Centennial specials! In March, for example, each room will receive $100 F&B Credit for stays booked in 2022, 3 nights or more.