“A strong woman looks a challenge dead in the eye and gives it a wink.” – Gina Carey 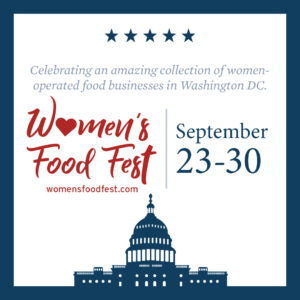 Recent events remind us that supporting women is more important than ever. But the inaugural DC Women’s Food Fest doesn’t just support women-owned businesses… it gives back 100 meals a day.

The idea for the DC Women’s Food Fest grew from a James Beard Foundation program called ‘Let’s Talk’ that brought female food entrepreneurs together for support and business survival. This initiative of the James Beard Foundation Women’s Leadership Program has become active in ten cities across the United States and connected over 150 women restauranteurs. And in DC, it has led to the Women’s Food Fest, which will take place from September 23rd through 30th, 2020.

Over 40 women-owned food businesses in the DC area will participate in Women’s Food Fest, with each offering a special dish, drink, or other delicious menu special. It brings patrons in to support women food entrepreneurs, and it also raises funds in order to distribute — through the Hook Hall Helps project — 100 meals a day to charitable organizations.

For example, Daniela Moreira of Call Your Mother invites you to enjoy the Palace Bagel with  Peach Cream Cheese, Peaches, Peach Jam, and Cobbler Crumble on a Poppy Seed bagel for the cause; Fiona Lewis of The District Fishwife will serve Albacore Tuna Nachos as the week’s menu special, and Hook Hall’s Anna Valero will feature cocktails with spirits made by women-owned companies like Butterfly Spirits and beers brewed by local women brewmasters.

“We aren’t your regular restaurant week, but instead are inviting full service and fast-casual restaurants, cooking schools, bars and lounges, ice cream and gelato stores, delis and bakeshops to participate and offer specials to customers during the week,” said Micheline Mendelsohn, one of the organizers.

A full list of participating entrepreneurs can be found here.

Previous Post: Winners from the 38th Annual (Streamed) RAMMY Awards
Next Post: Jack Rose, You Had Us at Whisky Wall