South Florida native turned DC local, Brittany Singer is a digitally savvy PR professional with a passion for tech trends, international travel, and the performing arts. Over the past five years, Brittany has had the honor of watching the District's stunning physical and cultural transformation and enjoys covering new hot spots, live events, and exploring everything DC has to offer. You can find her on Instagram and Twitter @BrittanyLSinger.

A fascinating moment in American history is brought to life at the Southwest Waterfront’s Arena Stage with the production of Pullman Porter Blues. Set in 1939, Pullman Porter Blues takes us behind the plush décor and luxurious amenities offered aboard first-class

railroad cars, into the untold story of the Pullman porter.

Written by playwright Cheryl L. West, this Midwest blues musical explores the lives of three Pullman train porters and their journey battling each other, racial tensions, and an uncertain future, in hopes of reaching a better life.  Outstanding performances include E. Faye Butler, as traveling blues singer Sister Juba, and Warner Miller, who plays the young and ambitious 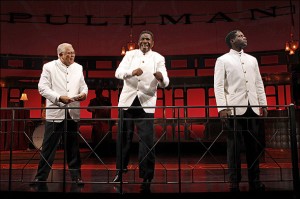