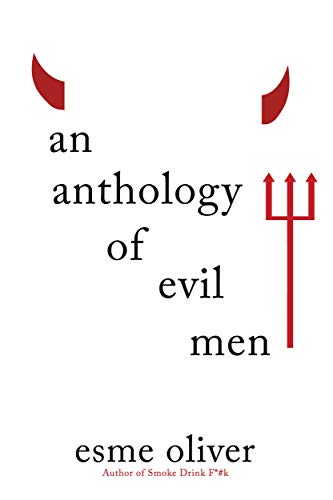 feelings,” explains Esme Oliver.  Oliver, the author of Smoke Drink F*#k, likes to be a little devilish herself, but true evil is the topic she’s been exploring most recently.  She’s back with her irreverent style and unapologetic candor in her latest book, a collection of essays largely built upon Oliver’s own experiences that define her worst encounters in this #MeToo era, An Anthology of Evil Men.

The book claims to show the highs and lows of a woman attempting to date and soul-search in her 30s, but turns out to be more of a cringeworthy recount of how tough relationships — of all kinds — can be in the modern age. Strong women should be able to stand up for themselves, but despite her confidence, talents, and education, Oliver, like so many, has difficulty mastering this.

Sexual harassment and a lot of naiveté play a role in Oliver’s anguish.  She continues to overlook blatant red flags, inviting the same type of toxic men to take advantage of her again and again.  But are these men  evil?  According to Oliver, yes.

“Paul, for example, in my book expressed undying love for Esme, but was really using her for his own gain — to get a job at her law firm.  Evil is also a byproduct of power; Jack, who sexually harassed Esme, was doing it to exert power and to harm another person.  These men, both narcissistic and self-consumed, sought to crush her spirit for personal gain. ”

Sadly, too many women have stories like these, even though we know all men aren’t evil.

But while Oliver laments that “so many women today have experienced crippling heartbreak as well as insurmountable obstacles at work perpetrated by evil men,” the most cautious takeaway from An Anthology of Evil Men may be that to balance career, life, and love is as delicate a task now as it ever has been.