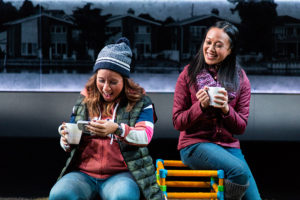 After we left the Studio Theater production of Cry It Out, my companion remarked, “It’s nice to see a play about women.” I reflected upon the last several shows I’ve seen (and I’ve seen many), and had to agree. Women aren’t the foil or the triggering event, or the reward/punishment in Molly Smith Metzler’s sharply observant Cry It Out. Even as their own identities have dissolved post-partum, this snapshot of a human life moment anchors on newly-suburban New York City attorney Jessie (Emjoy Gavino) and gritty Long Island native Lina (Dina Thomas) grappling with the physical and emotional shrapnel of new motherhood. 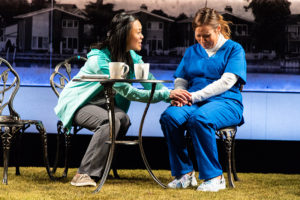 monitors where two adrift mothers turned unlikely friends find oasis. The physical tether of motherhood is embodied in the set – the women are confined by the range of their baby monitors, unable to tread beyond these technological umbilical cords. Though they define the events, the babies are offscreen – this play is about the women, motherhood, and the struggle to be both. Sharply comic, Metzler alternately has you belly laughing and wiping tears as she implodes the myth of maternal bliss.

Joanie Schultz expertly directs the cast to vulnerable and honest performances honoring the diversity of reactions to the disruptive arrival of an infant. Jessie wishes to be a stay at home mom, but is reluctant to tell her offstage spouse. Working class Lina has little choice and struggles to map the intersections of work, 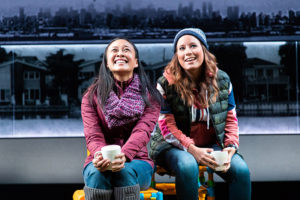 childcare and the amputation of leaving a baby behind. Disruptive, disdainful Adrienne (Tessa Klein), a jewelry designer on the verge of the big leagues, rages at social judgment that she should only want to sit around the house cooing at her daughter, but her similarly professional husband Mitchell (Paolo Andino) should not. Mitchell, ironically, would rather be a stay at home dad as he frets over his wife’s distance from their child. Metzler doesn’t offer answers, but flays open this particularly vulnerable time, where women face the greatest demands, with the least capacity to deal with them.

The play also doesn’t shy away from the cruelty of American inequality, and how harshly our range of choice is defined by class and money. The characters come from alien wealth quadrants, reinforced by Kathleen Geldard’s on-point costuming. Mitchell and Adrienne literally look down on Jessie and Lina from their hilltop enclave, and despite the tender and true friendship Lina and Jessie have forged from the isolation and alienation of new motherhood, the naiveté of Jessie’s privilege sharply highlights the lifestyle 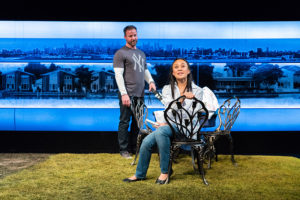 chasm on either side of the lawn oasis. Thomas, in particular, shines as Lina, both bawdy and heartbreaking, full of zest for life, but weighted with the cement boots of the punitive realities of the “have nots.”

Laughs, truths, wit, wisdom and a few surprises – Metzler packs it all into Cry It Out. It’s an astute, observant play that every parent should see.