Recent news of etsy accepting mass produced items might mean the Artisan could be a real dying breed.  But enter the annual Crafty Bastards  arts fair, which descended on DC once again last weekend: It’s crafty collection satisfied those looking for what etsy used to offer… but with that personal touch.

Paper, the event, now held at Union Market, is a juried showcase. Attendees found the cutting edge — and best produced — of the crafty crowd, while smart shoppers eyed temptations… both in the arts and for their appetites!

There was much bumping into friends (of the real and social media type), as well as bumping into celebs!  Project Runway winner Jay McCarroll (at right) took time from signing autographs, tv show filming, and actually selling his line of bright accessories to dish with us: 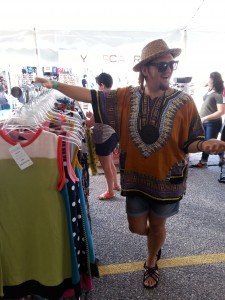 “I have some shows in the plans, but if I told you I would have to punch you in the throat,” he joked (we think?!)  Luckily we were protected by one of his scarves during the interview!  That Crafty Bastard!

Previous Post: Free Tix! Screening of the “Adorably British” PRIDE
Next Post: Every Cocktail at this New Bar in Chevy Chase Gives to Charity