Saturday night at the AFI Silver Theater in Silver Spring, DC saw the world premiere of The Legend of Cool “Disco” Dan — a documentary that discovers the “other” Washington. 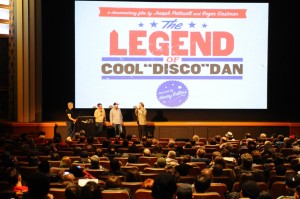 The film tells the story of legendary graffiti artist Cool “Disco” Dan, a mysterious, ubiquitous presence during the height of 80s — which was marked by go-go music, record crime rates and citywide dysfunction. As intrigue about Cool “Disco” Dan’s identity grew, his scrawl became a unifying force for a city on the verge of chaos.

Narrator (and DC native) Henry Rollins and filmmaker Roger Gastman (Producer, EXIT THROUGH THE GIFT SHOP) were on hand for the premiere and to share firsthand their fascinating experience with this chapter of local history.

*Additional showings at AFI added for March 2 and 3.