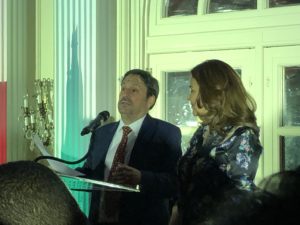 to his residence last week to celebrate The Washington Diplomat‘s 25th Anniversary as well as the holiday season. “No business, just party.”

Praising The Washington Diplomat as a “trusted resource for the latest developments in the diplomatic community and international relations” with its “timely analysis, cultural sections and diplomatic newsletter,” Ambassador Santos welcomed a bustling crowd of revelers including Ambassadors from a dozen countries, Samantha Sault, Sean Spicer, Scott Thuman, Suzanne Kianpour, and R. David Edelman for dinner, drinks and dancing.

The night was diplomatic extravaganza — and a ringing endorsement — from the former journalist and advocate for free press whom The Washington Diplomat’s Victor Shiblie hailed as a “hero to journalism… whose passion led him to be kidnapped by Pablo Escobar for eight months.”