On Saturday night, the National Building Museum welcomed over 800 people to celebrate the work of Children’s National Medical Center at the 7th annual Children’s Ball.  Though held in one of Washington’s largest venues, global attendees, including CNMC donor Yousef Al Otaiba (UAE Ambassador to the US), showed just how true is the night’s theme — “It’s A Small World After All” — in the Nation’s Capital.

Fox News Channel’s Bret Baier admitted he hadn’t needed an arm twisting to serve as emcee.  Not only are he and his wife Amy friends with the Quinns, but he shared his never ending gratitude for the CNMC nurses and doctors who have taken “excellent care” of their own son through more than a dozen heart related surgeries.  (Bret is so committed to CNMC that he even drafted good pals for the event’s opening video spoof about the hunt for Maltese Crystal Bear which included such notable names as James Rosen, David Gregory, Andrea Mitchell, Chris Wallace, Bob Schieffer, Ed Henry, Senator Kirsten Gillibrand, Senator Lindsay Graham, Rob Lowe, Donald Trump, Bill O’Reilly, Norah O’Donnell, Charlie Rose and Gayle King.  The bear was found with great fanfare as St. John’s College High School Regimental Band marched it on stage!) 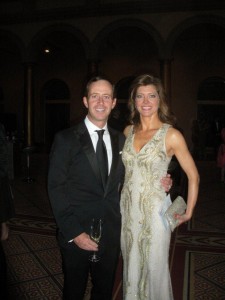 New to this year’s program were two special awards.  The Children’s Innovation Award went to GE Healthcare and was accepted by Dr. Richard Hausmann, President & CEO of GE’s Magnetic Resonance.  Recounting several new developments that are improving children’s lives every day he energized the crowd — and likely made a few more Nats fans — with his example of a new clinic to combat diabetes that came thanks to a Washington Nationals’ Foundation gift (as if DCers needed another good reason to go to more games this year!).

Congressman Steny Hoyer received the Children’s Advocacy Award for his support which has helped to ensure that all children in our community have access to the best possible facilities, therapies, and services, regardless of geography or income.  He was also instrumental in securing support for the intensive care unit, pediatric decontamination unit and the East Patient Tower. 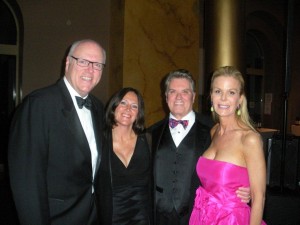 Wallets were quickly opening for the Live Auction as guests vied for: VIP Passes to Christmas in Washington, a Hollywood/NYC package (ticket’s to The Voice, Hot in Cleveland, and Dancing with the Stars, NYC’s Marriot Marquis and Broadway shows), a week in Steamboat Springs, CO, a Cabo San Lucas Getaway and Lorraine Schwartz earrings.  Bret and Norah O’Donnell served as  auctioneers, helping to bring the Gala’s fundraising total to over $2 million, beating last year’s $1.3!

The evening continued in the After-Hours Lounge sponsored by HITT Contracting with dancing to The Morrison Brothers Band.  Thanks to Sprinkles in Georgetown, everyone went home a winner with cupcakes to make the night even sweeter.

Previous Post: At Crossroads, DC Gets Another Buddha, Global Flavors
Next Post: Opening Night at Chevy Chase’s Mi Cocina: Texans Do the Mambo