With just one weigh-in challenge left, it seems Chef Will Artley is poised to take home the gold in the American Cancer Society’s inaugural Fit for Hope weight loss challenge.

Artley, along with 13 other Capital area chefs and mixologists, has been participating in the Fit for Hope Challenge since June 24th, on Team Jason (with professional trainer Jason Yoo) and (at this time of this posting) has raised $2,105.00 and lost over 65lbs. 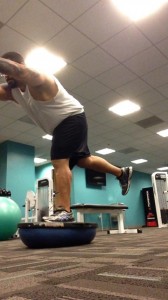 journey and I wanted to help raise money for a great cause,” Artley explained to KSM, admitting that this journey for him has been equally about exercise and healthy eating.

“I have eliminated preserved and processed foods from my diet – and have also learned how to eat a balanced nutritious meal.”

In fact, eating healthy was easier than he anticipated, he says.  Harder than expected?  “Making sure I take a rest day, and not overdoing it.”

The 12-week challenge culminates at the Society’s Taste of Hope event on September 24 at the Carnegie Library where participating chefs and mixologists will be evaluated based on percentage of body weight lost, and an ultimate winner will be announced.

So he’s in the home stretch, but Artley’s not taking anything for granted just yet.  “I keep a close eye on the other challenge competitors,” he nods.  “But as of today, I have lost over 65 pounds and I’m doing a sprint triathlon a week after the final weigh-in… I’d say I’m happy with my progress so far.”