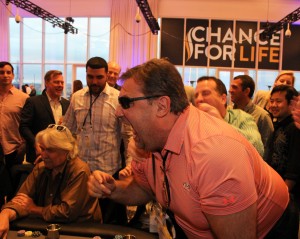 Inspired by his goddaughter Kennedy Snyder and her courageous battle with cancer, Brad Nierenberg (CEO, RedPeg Marketing) created the Chance For Life Foundation.  In 2005, when Brad began the charity, it consisted of a handful of people at a small gathering, but it has now turned into one of the largest and most notable charity poker events in the DC area.

Diagnosed at age 2 with spinal cord cancer, Kennedy has had several surgeries and therapy.  Throughout her ordeal she has remained positive and continues to help raise money with the Chance For Life Poker Tournament. 100% of the money raised is to fund pediatric 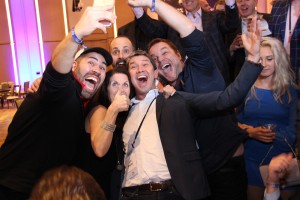 Nirenberg has watched his charity grow substantially over the past twelve years, and is proud to have been able to provide more than 2 million dollars to pediatric cancer research. 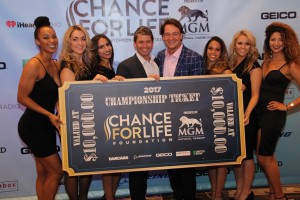 players competed for a seat at the World Series of Poker in Las Vegas, valued at $10,000.  Players bought in with a purchase of a ticket with all ticket sales money supporting the Chance For Life Foundation.

Amateurs as well as local and national celebrities were on hand to play in the tournament, including Washington footballer Chris Samuels, a few members of the Washington Wizards, and poker legend Phil Hellmuth. The nine hour event took place in the MGM Grand Ballroom and was hosted by Doug Kammerer, a popular

In a unique twist, Jeff Snyder, father of Kennedy and friend of Nierenberg, was the winner for 2017!  Snyder attends the event every year with his daughter to play in the tournaments and fundraise for the event — but this year held a story book ending to the tournament.

In addition to the poker play, money was also raised through a large silent auction featuring a wide range of donated items such as framed art and sports jerseys from multiple teams.  Other items in the auction included a Jimmy Kimmel Live Green Room Experience and Washington Nationals baseball package.  A live auction received bids

on two coveted tickets to the Masters Golf Tournament.

And there was also a wine and chef’s tasting reception toward the end of the tournament.  Broadcast journalist Angie Goff hosted the event that featured craft beers from the area, fine spirits, top shelf wines from around the world, and delicious food from several MGM restaurants to sample.

Theater that featured live music on the stage by the Spazmatics, dancing, and cocktails.  The DJ and open bar, along with the Vegas nightlife vibe and NCAA Final Four Experience, kept the guests happy into the evening as tallies were counted to determine Chance for Life’s 2017 overall funds raised to be over $750,000.