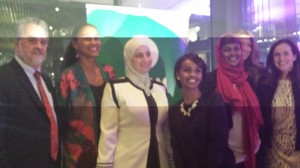 International Women’s Day, which is on March 8, is a holiday that is starting to gain ground in Washington, DC.

Last night, Oxfam America decided to have an awards ceremony, The 2016 Right the Wrong Awards Ceremony at the House of Sweden on the eve of International Women’s Day.

Raymond C. Offenheiser, the president of Oxfam America, described the crowd gathered that night as a “sisterhood” and the occasion as a moment to celebrate women’s accomplishments throughout the world. The honorees of the Right the Wrong Awards were Syrian activist Majd Chourbaji and mother-daughter team Fartuun Adan and Ilwad Elman, who were noted for their work in Somalia. HGTV celebrity Genevieve Gorder and “Parenthood” actress Joy Bryant presented the awards to the honorees that evening. 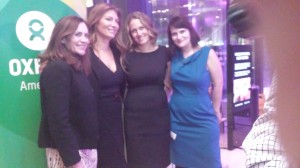 Gorder called herself “a new sister” in this sisterhood and said, “It’s magic when you know your destination in life. When passion meets purpose, it’s unstoppable.”

When it comes to the award recipients, their work echoes what Gorder said. Chourbaji’s work with Syrian refugees and Syrian media shine a light that there can be life after the years-long conflict in Syria. Fartuun Adan and Illwad Elman’s work gives hope to rape victims and children who live in Somalia.

But these women don’t do their work without risk. Last night, Offenheiser lamented that Honduran indigenous rights activist Berta Cáceres was murdered recently.

“We have much work to do,” Offenheiser said.

Previous Post: And the 2016 RAMMY Nominees Are…
Next Post: [Party Pix] Inside The 13th Annual Blue Jeans Ball