The Heurich House celebrated its 125th year with a 90’s themed backyard birthday bash over the weekend. The pay-what-you-can festivities featured tastings of the museum’s historically and scientifically accurate beer revival, Senate Beer, a DC hometown favorite originally produced by the Chr. Heurich Brewing Co., which the museum plans to release to the public this fall.

favors, a birthday cake, sips from local brewery RaR, and 1994 Top 40 hits on the boombox. Guests were highly encouraged to sport 90’s threads, bring a lawn chair and a few friends, and spend an afternoon in the mansion’s great gardens — as well as tour the House museum, of course.

The Dupont Circle home was built for Christian Heurich, a German immigrant, local brewer, and philanthropist (1842-1945). He and his family lived in the home from the building’s completion until his wife’s death in 1956. All proceeds from this event benefit the preservation of the Heurich House. 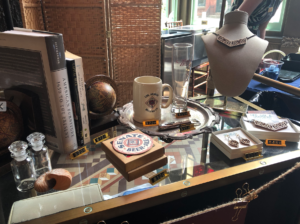 Previous Post: [Vid] First Interview with Miss DC 2019, Katelynne Cox
Next Post: Which Member of The Chainsmokers Was Spotted at Heist Last Weekend?!