“Americans are a better, stronger force for good in the world because of our volunteer core and that we are a people who serve,” announced President Obama this Monday in the East Room of the White House.

While serving in office, Bush created this award to recognize volunteers who spark change and find innovative ways to improve the world. Though the award is given daily, this special ceremony marked the 5000th, which was presented to Floyd Hammer and Kathy Hamilton. The pair founded the nonprofit Outreach, Inc. which provides safe water, food, medical care, and education to those in need at home and abroad.  To date, Outreach has distributed 230 million free meals to children in more than 15 countries – 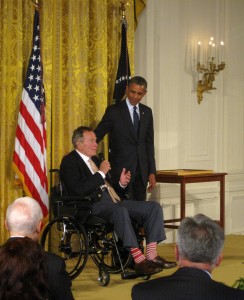 including the United States.

Obama also paid tribute to Bush’s lifelong dedication to serving and giving back to his country.  The President spoke highly of Bush’s legacy and the work he has done since leaving the White House. Yet, he added that this should come as no surprise, “We’re talking about somebody who did a parachute jump at the age of 85. Not just any jump, but a parachute jump. This is someone who is not slowing down.”