Currently on stage at the Shakespeare Theatre Company, the international hit Brief Encounter, for its own brief — but brilliant — run until April 13th at the Lansburgh Theatre (450 7th Street NW).  Part of STC’s Presentation Series, this UK production comes to DC from Cornish theatre company Kneehigh on its acclaimed international tour. 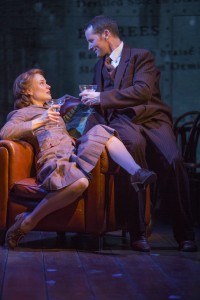 Brief Encounter is a blend of theatre and film (based on the iconic 1945 movie and Noël Coward’s one-act play Still Life) that has earned nominations for two Tony Awards®: Best Performance by a Leading Actress in a Play and Best Sound Design of a Play.  Switching seamlessly between live theatre and projected film footage, the show takes audiences to a bygone age of romance and the silver screen, following Laura (Hannah Yelland), a married woman traveling into town to shop, who gets a speck of coal dust in her eye. 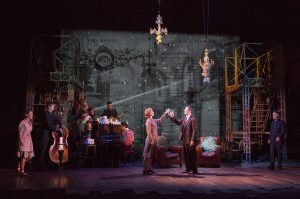 A mere speck of coal dust starts it all… a Brief Encounter.  Because then, handsome Dr. Alec Harvey (Jim Sturgeon) comes to her aide, and from this chance encounter an irresistible passion sparks and grows.

Live musicians play on stage even as the characters jump in and out of film screens in this funny — yet bittersweet — happening.   We’ll bet it’s unlike anything you’ve experienced before!

Previous Post: Taste of the Nation: A Seriously Scrumptious Way to End Hunger
Next Post: Inside Wednesday’s #unmiSTKable Party at Intermix