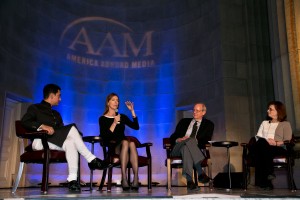 The evening included a reception, dinner and informal on-stage conversation among the three (above) honorees, moderated by Hornaday, to discuss how the power of film (and the media as a whole) works to empower and educate about critical social and public policy issues.

Said Khan from the stage: “All my capabilities lie in the field of media and storytelling… So we try to combine our expertise and capabilities in storytelling and television and pick social issues that we feel can make a difference.”

Previous Post: Benneton Sweetens Up Its Styles with Pre-Halloween Fashion Honor Fete
Next Post: Movember ‘Staches Up at Del Friscos