So we’ve PROVEN that DC has style.  (It does.  It has.  For years.  Get over it.)  And now there are some proven venues for SHOWING that style — like a magazine party where I know all of the men will be dressed up in their hottest.  I’m so there!! 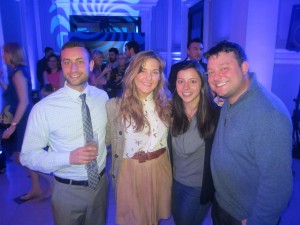 The scene was filled with eye candy — speaking of humans and their habiliment — and attendees were in hot pursuit.

Greeted by a huge (and interactive) Light Bright, blue concoctions in the (oh-so-party-painful) martini glass, and roaming oyster shuckers (by Oysters XO), the crowd of DC’s most notoriously out and 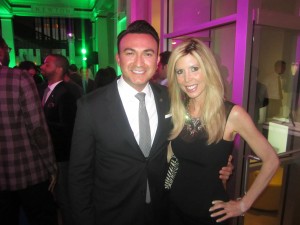 outfitted complimented each other’s style over sets of party tunes spun by DJ Chaos, avoided the larger than bite-sized hors d’oeuvres — and paused for fashionably short remarks by DC Magazine’s Michael McCarthy — before stealing away to the sexy side room to sip nips of Bulleitt bourbon (and rye!) paired with an unusual jerky bar.

That’s also where the suits were stashed.  And men in suits steal the show every time.