Andy DelGiudice is a freelance event and urban lifestyle photographer based in northwest Washington DC. You can follow him on Twitter @DGDCphotos

City Brew Tours is in the midst of launching a DC branch of its regional brewery touring company, and appears to be organizing the perfect option for exploring the DC areas burgeoning small batch brewery scene. 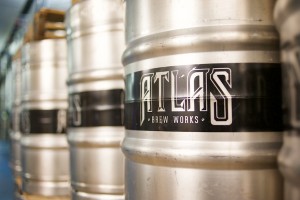 Originally founded in Burlington, Vermont by Chad Brodsky, the DC Brew Tours arm of City Brew Tours seems well positioned to serve District beer devotees and newcomers to the brewing lifestyle alike, as well as out of towners looking for a unique perspective on the capital area and its surrounding neighborhoods.

The DC Brew Tour shuttles attendees to a number of breweries and provides a guided behind the scenes look at the operations, brewing t

echniques and small batch products of each brewery, with a history of brewing and fermenting along the way. Many in our tour on Saturday night were surprised to learn that the ingredients to create fermented “beer”, in its original sense, were the earliest crops of our hunter-gathering ancestors, making its production the impetus for transforming into stationary agricultural societies.

Modern humanity is due in large part to a desire to produce more consistent and plentiful beer, and for that, we must be grateful.

the various flavors on tap at each stop on the tour was accompanied with insight into the styles of beers favored by each brewery as well as how their backgrounds, locations and brewing techniques influence their brewing profiles.

Regardless of origin or style, the DC small batch brewing scene is churning out some incredible beers and DC Brew Tours is a great way to experience its breweries and practitioners.