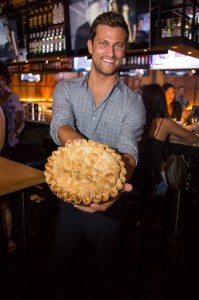 He didn’t quite make it to the top bracket on ABC’s The Bachelorette, but Chris Bukowski (also a star of the Bachelor Pad) now has his own tasty tournament spot for single elimination.

The bachelor very recently opened a new restaurant, Bracket Room, in Arlington, which is a sports bar/restaurant that loves the ladies as much as Chris does.  (*wink)

To make the resto launch — and also his birthday — a gamechanger, Bukowski feted his big day at the Bracket Room with a fundraiser for the American Foundation of Suicide Prevention, raising over $1000 in remembrance of good friend and fellow Bachelor contestant Gia Allemand.

The kind remembrance was accompanied by a sweet surprise.  Bukowski and hosts offered attendees, along with champagne and sparklers, miniature apple pies from Pie Sisters (and the birthday boy finally got a pie, too, seen at left).

Birthday bribery is the best way to Bracket!

Previous Post: “15 Days of Tryst” for 15 Years of Trysts
Next Post: Zaytinya: There’s More than One Way to Skinos a Grape

Join Synetic Theater for a killer night starting with a performance of our spooktacular show, The Madness of Poe followed by an indoor/outdoor dance party with all the food, drinks, tricks, and treats that a ghoul could ask for. Featuring Food and Drinks from National Landing’s… Read More
View Calendar
Add