2013 (already!)  This one, an upscale/casual contemporary seafood spot in Penn Quarter replaces what used to be Jose Andres’s Café Atlantico and Minibar.

Now a whopping 135-seat ode to the sea, Azur’s atmosphere comes complete with subtle ocean hued accents — and that mesmerizing custom-made chandelier that gives the illusion of underwater air bubbles.

“From top to bottom, this is going to be a true seafood restaurant,” said De Pue, 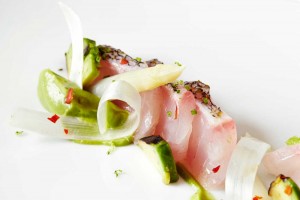 highlighting a menu from sustainable seafood purveyors that tempts with entrees like Roasted Turbot with hakurie turnips, Red Mullet alongside a shaved Fennel salad and Grilled Tiger prawns with snap peas and popcorn grits.   (Don’t worry, Vegetarians and Meat Eaters: There will always be a little something for you, too!)  But swimming back to the sea…

Be sure to check out the six seat raw bar on the third floor with its oysters, caviar and house-cured salmon in their pure and unadulterated form.  Briny bar bites are the focus of the first floor bar, where Fish and Chips, baked oysters, marinated white anchovies, sweet and sour fried squid and uni toast are served alongside cocktails named for famous sea vessels.

And this just in… Starting Tuesday, from 5-6:30 PM seven days a week, enjoy happy hour specials that include $5 drafts, $6 select martinis and a rotating selection of $1 oysters!

*All images courtesy of Azur