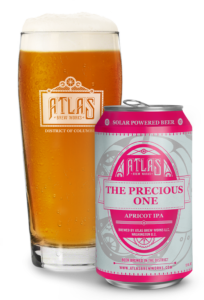 Ivy City brewery Atlas Brew Works announced the return of what may be its most famous beer.

The Precious One, an apricot-infused hoppy and fruity IPA, made its official Tap Room release the last day of January 2020 but will be offering DC its first real festive tastes on Valentine’s Day, when The Precious One gets its own pour party at City Tap Penn Quarter (901 9th Street NW) from 5 pm to close.

Feel like you’ve heard of this beer before?  Highly likely. The Precious One was touted as the poster child for disaffected industry during the 2019 government shutdown (over the holdup of approval for its keg collars).