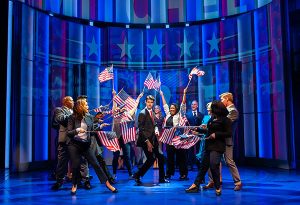 If Mr. Rogers could have been president, his tenure might have looked a lot like Dave’s—the titular character of a new musical, now debuting at Arena Stage, based on the 1993 Academy Award-nominated film of the same name.

A nerdy, passionate teacher of American history who idolizes Abraham Lincoln and makes his students memorize the Gettysburg Address, Dave Kovic (played by Drew Gehling) is tapped by former-CIA-director-turned-Chief-of-Staff to play the president’s stand-in 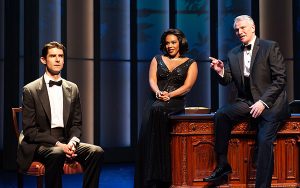 when the real Commander in Chief goes into a coma (from a heart attack while sleeping with his mistress…). But unlike his doppelganger, Dave cares deeply about integrity, justice, and neighborly love, and in so doing throws the entire nation and Washington political establishment for a loop.

With witty humor, lovable (and hilariously unlovable) characters, and a few punchy musical numbers, it’s a 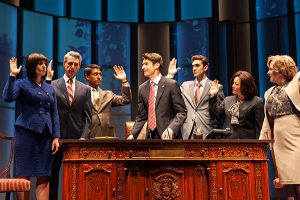 shamelessly feel-good jaunt that will have you singing along to the Old Spangled Banner (no really, there is a scene where you will probably stand and sing) even as the fantastical plot reminds us more than a little of all-too-recent White House scandals.

Dave is playing through August 19 at Arena Stage.

Previous Post: Tex-Mex Favorite – Guapos – To Open at Georgetown Waterfront This Month
Next Post: Salt-And-Pepper and a Celebration at Georgetown’s ‘Roots Cabin’ Opening