Because sometimes you just need a setting more intimate than an Embassy.

It was an evening of cultural cinema at the home of the British Deputy Head of Mission, Mr. Philip Barton, Wednesday night.  The small crowd of international Washingtonians admittedly gathered more out of curiosity for the summons than interest in the Falkland Islands… at first.  An invitation simply mentioned a preview screening of “51 Degrees South.”

“51 degrees South.  That’s far away!” said Barton as he introduced the project’s filmmaking pair — who discovered their mutual interest and decided on the topic of their documentary in a pub.  “It’s a story about the people who live there.  There’s only 3,000, which I’ve been told is significantly less than the number of staffers up on the Hill at Congress…”

DOD’s Zach Gifford, National Geographic Traveller’s Jeannette Kimmel and Erin Block, and The Case Foundation’s Jade Floyd found the Falklands a bit more fascinating as they sampled both traditional British fare and a few segments of the seven part series, all available online.

Oh and by the way, “They feel very strongly that they are British citizens and they want to remain British.” Barton tells us it’s a topic the island be voting on this year.

Previous Post: A Midsummer Night’s Dream is Mind over Magic
Next Post: Biden Buys in Bulk at DC’s New Costco 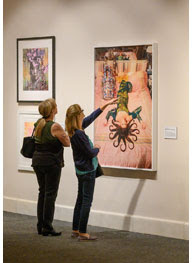