No, it wasn’t Mrs. White, in the Conservatory, with the wrench.  It was the Nightlife Promoter, in the Ballroom, with the bottle of Dom.

Like a Clue conspiracy, DC’s new club concept, The Huxley, has us wondering who, what, when… and how do we get in?

“At the end of the day, all clubs are selling the same alcohol products, so [to differentiate]… It’s all about ‘the show’ and it starts at the front door,” explained owners Ryan Seelbach and Eric Lund of their soon-to-debut spot, which tempts DC’s nightlifers to go looking for Mr. Boddy (or Mr./Mrs. Anybody!) inside with costumed performers, live musicians, celebrity DJs, and surprise entertainment.

It’s not a mystery mansion, but rather an old TV studio space transformed.  And no, there’s no murder mystery (yet!), but two different rooms offer very distinct 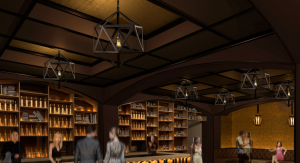 experiences, according to Lund.

There’s the Ballroom with its rich red wall-coverings, mirrors, and purple velvet curtains, hardwood floors for dancing and eleven “bottle-service” tables on the sidelines.  And then there’s the smaller Study, library inspired with dimly lit candle chandeliers over six elevated table alcoves.  Each has its own DJ and type of music nightly (Top 40, commercial House…) so selecting your table spot takes strategy.

A text message (202.RESERVE) is the secret entry weapon to get listed.  Or reserving a table works just as well.  Just don’t get caught trying to sneak through a secret passageway — the venue’s still under construction and there may be a lead pipe gone missing.

*Photos are renderings.  The Huxley is scheduled to open in November.

One thought on “All New Huxley Enters DC Nightlife Game”