1984, adapted from the original George Orwell novel by Robert Icke and Duncan MacMillan, is a play designed to make the audience extremely uncomfortable, in which it succeeds. Whether an audience thinks the performance is “good” or “bad” may hinge upon its comfort level with being pushed to the edge and feeling distinctly unsettled. Regardless, the Shakespeare Theater Company production created by Headlong, an acclaimed U.K. theatre ensemble, with the support of the Nottingham Playhouse and The Almeida Theatre, is done with exceptional polish.

I will caution – and the Shakespeare Theater Company makes clear – that the play is graphically violent. This should not be a spoiler alert, as we all read the novel in high school. It’s part of the lexicon: Big Brother is watching. Despite the familiarity of the material, Headlong’s multi-media staging is piercing. 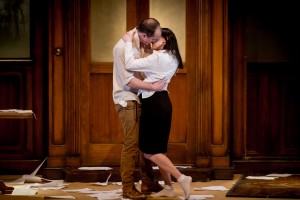 The meat of the novel is brilliantly enclosed by a fictional bookclub discussing a “seminal written work” spilling a history of surveillance, identity, and the security state. It is George Orwell’s chilling vision of a dystopian future told through a journal: April, 1984.13:00. Comrade 6079, Winston Smith thinks a thought and starts a diary. But Big Brother is watching – and the story races from foreboding to torture as the door to sinister Room 101 swings open and swallows the man, and his audience, whole. Chloe Lamford’s design and Natasha Chivers’ lighting turn a stark stage into the center of terror: Room 101. I felt distinctly uncomfortable as the house lights brightened, the cloak of darkness protecting me from events onstage ripped away, exposing me at once as Winston, and Big Brother. Piercing the fourth wall often creates uncomfortable normalization, but here it

As much as you think you know the novel, are prepared for what’s coming, it is painful to watch. The play reaches you in a way that no film can. The torture is visceral, happening to a man before you, portrayed with agony and vulnerability by Matthew Spencer. With everything they graphically show, they imply even worse. The Shakespeare Theater Company presents the play with a “no returns” policy – there is no intermission and once you leave you cannot re-enter. You are as trapped as the characters. 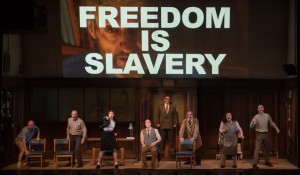 Given the national conversation about big government, private email servers, NSA surveillance, and unlocking Apple phones, Orwell’s sinister projection reaches uncomfortable parts of the contemporary psyche. The Everyman component rings true. Most notable are scenes between Winston and his love Julia (played enigmatically by Hara Yannis) in what they believe to be a “safe space.” The acting happens offstage, projected via live feed on a movie screen through a spy camera. You are a voyeur to their intimacy. Even so, you are distracted from watching the action unfold, busy questioning the loyalties of Julia, O’Brian (Tim Dutton), and everyone who crosses Winston’s path. Yet you watch, as if with popcorn, as their relationship evolves. This consumption increases the post-betrayal feeling of tainted complicity. You ask yourself, as you watch the characters absorb colleague disappearances one by one, as you watch the video of a protestor hauled out of a political rally, would I stand up? Would I protest, at risk to myself?

The play is about the power of language – literally it is an adaptation of a famous tome. Figuratively, language is how we express thoughts or reality. We use words to communicate. Manipulating them is power. Deleting them is dangerous.

Given my familiarity with the book, I was surprised at how emotional was the outcome. How uncomfortably sat Winston’s ultimate, unavoidable fate. It made me rethink strapping on that device tracking my daily steps and heart rate. Yet despite everything, the play concludes with a hopeful question mark. Headlong is the first production company to dramatize the Appendix to 1984, written by Orwell. The author was adamant the novel never be published without it, though few slog through it. It was a revelation to me, potentially it changing everything about Orwell’s message and the meaning of “Orwellian.”

The lesson of 1984 may be that you never can know anything for sure. We think in binaries, good or bad, but life isn’t like that. It’s an uncomfortable lesson, and I was squirming in my seat, even as I clapped as hard as I could.

Previous Post: Mosaic Shares Marred Memories in ‘After the War’
Next Post: Win FREE Tickets to “The First Monday in May”