Springsteen’s ‘Glory Days’ rang out across the 1776 campus on Tuesday night as Washington’s entrepreneurial community gathered to celebrate all things American.

To fete its namesake holiday, 1776 converted its modern office space into a country fair. Guests were treated to carnival games, a live band and a southern barbecue, all while sipping on patriotic pours — like the ‘Jefferson Julep’ and ‘Franklin Fizz!’

1776: Where the Revolution Begins, is a company devoted to connecting startups with the resources they need to grow. After studying innovative models from around the world, they devised a system to provide services from mentorship and corporate connections to capital and media attention — in sectors such as education, health, energy, and smart cities. 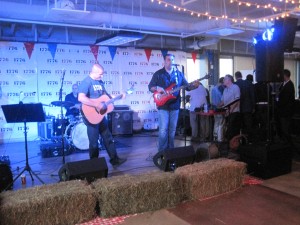 “We want this to be the city of technology for the east coast, the Silicon Valley of the east,” explained co-founders Evan Burfield and Donna Harris as they announced their next initiative at the event: The Challenge Cup.  Representatives from 1776 will travel to 16 cities around the country looking for the most innovative start-ups and bring them back to DC for a weeklong festival competition of endeavor and entrepreneurialism.